APPALLING  – THE DEMOLITION OF THIS FINE FACADE HAS JUST BEEN APPROVED WITH ONLY ONE COUNCILLOR VOTING AGAINST IT.

THE OFFICERS AND PLANNING COMMITTEE SEEM OBLIVIOUS TO THEIR DUTY TO  PRESERVE AND CARE FOR OUR CONSERVATION AREA!   DO THEY REALLY NOT VALUE THE CONSERVATION AREA OR ARE THE DEVELOPMENT PLANS OF BIG INSTITUTIONS ALWAYS MORE IMPORTANT?

In February we reported an apparently positive engagement with the design team for the new UCLH facility on the site of the Royal Ear Hospital. The team told us that they intended to preserve the very fine brick and carved stone entrance block at the north end of the site. `this came very close to being listed, is noted as a local contributor and is a wonderful piece of design and craftmanship. It is one of the survivors of the early ere of the use of the area for medical research and, as such, is of great historic interest (like the thankfully listed Cruciform building).

We were called back to be updated on the design last month and were very disappointed to learn that the entrance block was now to be demolished in order to ‘improve patient experience’ and to allow the new building to relate better to its neighbour to the North. This neighbour is an entirely inappropriate glass and steel monstrosity of huge scale which would be more at home in Dallas than in Bloomsbury. It seems clear that the real motive for the demolition is a ‘cleaner floor plate’ and thus a cheaper building. Once more it seems that Camden will be backing the scheme despite the unnecessary vandalism of this demolition. 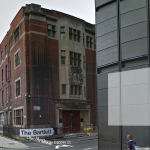 The entrance facade of the Royal Ear Hospital 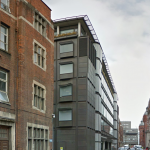 The building to the North of the Royal Ear Hospital to which the proposed new scheme will relate.