St Pancras Chambers and King’s Cross station are not just national treasures, they create a street scene which, given the proximity of Eurostar, is of international importance. The setting of these two Grade I Listed buildings must be protected.  And it is under threat; ironically from the body that is primarily charged with its protection – Camden Council.

History
These station buildings were intended to tower majestically over London. They were built between 1850 and 1875 as ‘palaces’ that reflected the optimism and confidence of the Victorian period. In front of them lay Georgian terraced housing, perfectly proportioned but domestic in scale, in contrast to the large and deliberately grandiose buildings opposite. The station facades presented a proud public face to the world, celebrating the collaborative effort that brought goods and people from the north to the metropolis.  These two stations are as impressive today as they were 160 years ago. They resonate power and prosperity in their own right. The character of these exemplary buildings would be greatly diminished by the construction of tower blocks in front of them.  To make these grand 19th century buildings subservient to 21st century speculation would be a crude act of vandalism, denying their historical significance.

This bird’s eye view drawing perfectly illustrates the scale relationship between the station buildings and the urban grain south of the Euston Road. 1885. 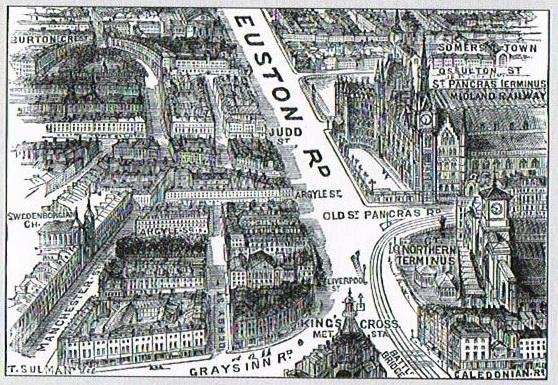 Threat
We are extremely concerned that the south side of Euston Road at King’s Cross will, over the next few years, receive planning permission for developments that are wholly inappropriate, given the context of the heritage station buildings opposite: St Pancras Chambers and King’s Cross Station.   These buildings must not be forced to compete in a face-off across Euston Road with a virtual wall of tower blocks; a confrontation in which no one wins except the developers.

The Town Hall Annexe (the egg-box) has been under threat of redevelopment as a tower block for some time.   Recently 1-11 Euston Road (immediately opposite King’s Cross Station) briefly came under threat.  This row of houses needs protection in its own right but also forms an important part of the context to the heritage stations.  This terrace is now, we believe, temporarily relatively safe.   But we know that the owners of the Access building (Belgrove House) are in negotiations with Crossrail 2, clearly with the intention of building a tall tower on this site.

Protection needed
This has all brought the threat to the heritage buildings’ context clearly into focus. We are now asking for some positive action from the Council to ensure that these Grade I Listed buildings are given the protection they deserve, not just the buildings themselves (which are being well looked after) but the context in which they are seen.  This context is the entire street-scape from Camden Town Hall itself all along to the Lighthouse Building.  No new building in this stretch of Euston Road should be planned without the benefit of a proper, holistic, assessment of this specific “Place”, to use a current council buzz-word.

Place Shaping
Sadly the Council seem oblivious to the concept of this street-scene forming a nationally important “Place” which must be managed as a whole, not piecemeal.    The Council have even recently created a “King’s Cross Place Shaping Plan” which utterly ignores the existence of this crucial area.  If “Place Shaping” is a meaningful activity surely it must apply here, at this world-renowned location?

Legal obligation
The Council are legally obliged to consult with interested parties about any development that will affect the setting of a heritage asset (ref. PP5, HE7.1).    They must recognise that development within the setting of a heritage asset can cause substantial harm to the significance of that asset in which case the Council must refuse consent. (ref. PP5, HE9.1 and 9.2).  All this rather technical verbiage means that the Council must listen to us when we say that tall buildings opposite the heritage stations will harm their setting and must not be allowed.  For over 3 years we have been insisting that a tower block must not be built on the Annexe site; the Council have refused to listen to us.