We note that the boundary includes not only Euston Square, but a block immediately south of the Euston Road. We trust that this is recognition of the fact that the proposal will potentially impact on the Bloomsbury Conservation Area. However, where boundaries are drawn can have long‐term and unforeseen consequences. The BCAAC would be concerned if this meant that the buildings included could be subject to a future land‐grab and demolitions, akin to what Crossrail have achieved around Tottenham Court Station area, via a parliamentary procedure, giving the developers and other parties immunity from normal planning controls and the minimum democratic control. It would be helpful to have a sight of the reasoned justification for the boundary of the proposed area. 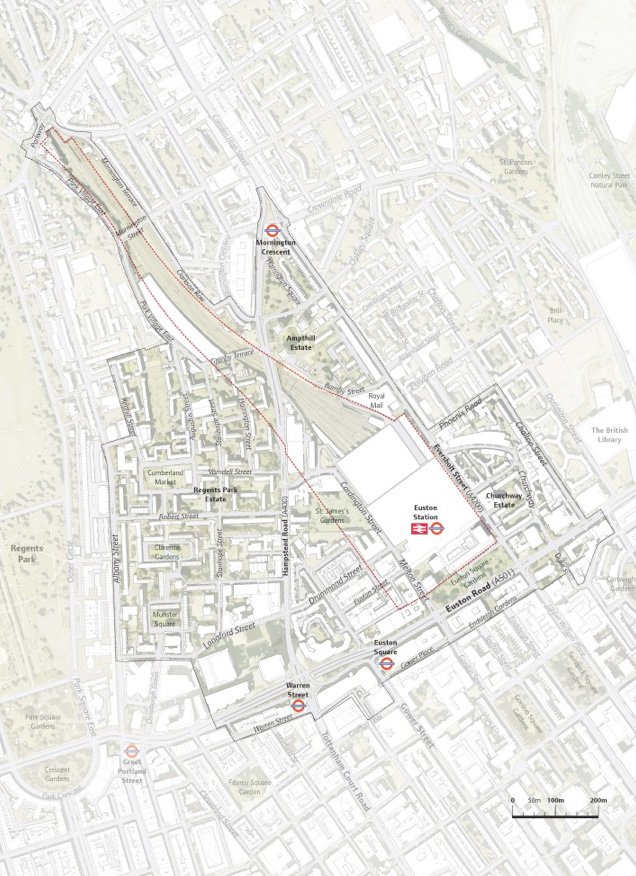 The fact that Allies and Morrison have been commissioned to produce the Historic Area Assessment, sadly does not inspire any confidence. In the past the BCAAC has successfully opposed unsuitable applications within the Conservation Area submitted by this practice. We are concerned that the final report will only be an analysis of the historic area and contain suggested recommendations for the management, rather than the protection of the historic environment, in the context of intense pressure for future changes in the area.

The area of Bloomsbury forms an urban landscape with an international reputation and is worthy of World Heritage Site status. If the character, appearance and setting of the area and the historic buildings of national importance it contains are under real threat from harmful new development this could well trigger such an application to UNESCO.

Buildings in the immediate vicinity

The proposed plan is immediately adjacent to four important listed buildings whose setting could be damaged by a proposal that is overly high, bulky or dominating. These are:

Particularly in the case of any development adjacent to these buildings consideration should be given to scale and articulation and to the use of sympathetic materials. Please note that we would NOT consider a metal and glass façade treatment to be sympathetic.

The proposed plan area is crisscrossed with numerous protected viewing corridors from the north. However, the BCAAC is determined that full consideration should also be given to the potentially harmful impact of any high buildings on views northward from within the Conservation Area itself.

The presence of the relatively high Grant Thornton Tower, itself an inappropriate building which is harmful to the Conservation Area, should not be used as an excuse for further development which is of inappropriate scale and height. Careful consideration should be given to the following northern local views which are likely to be affected by the development

It is stated that the plan provides an opportunity to rethink and vastly improve the urban environment and help to mitigate the potential blight issues the area is faced with.

Presumably in connection with this we are also asked to consider whether there are buildings which we think need improvement (removal, renovation, new use)? This omits the important issue of the retention of existing structures. The massive new development around Kings Cross Central has been designed to imaginatively retain, incorporate and improve existing station buildings and other related structures.

The existing Euston Square is a poorly used and difficult to access amenity. In the creation of any new open spaces consideration should be given to high quality design and screening from the Euston Road. The forecourt of the adjacent British Library is an exemplar.

Development to the north of the terminus

Mention is made of development ‘above’ the station. We hope this will be used as an opportunity to animate, with shops or housing, the station frontage along Eversholt and Cardington Streets which are currently just the blind sides of the station sheds. There should be an emphasis on trying to reconnect the areas either side of the station and tracks by as many pedestrian and cycle links as possible east/west. At the moment the first opportunity to cross the tracks is about half a mile north of the station. Such transverse links would also help break down the possibly monolithic character of the development which otherwise risks being completely out of scale with the fine grain of the surrounding street pattern.

The existing Euston station building can now properly be regarded as forming part of our c20th century architectural heritage. The BCAAC successfully lobbied for the listing of the CentrePoint tower, also by the same prominent architect, Richard Seifert, when it was under threat of radical external alterations proposed by Allies and Morrison in the 1980s. Therefore, serious consideration should now be given to the retention and refurbishment of the existing low station block and spacious main hall.

This is currently marred by numerous unfortunate accretions, which could easily be removed, thereby transforming the space and restoring the rigour and integrity of the architecture. It would then rightly form part of the historic group of station buildings along the Euston Road. It is assumed that the relatively modest height is partly dictated by the viewing corridors already referred to.

The precedents set by the restoration and imaginative refurbishment of both St. Pancras and Kings Cross stations show that it is important to retain aspects of the original architecture while providing modern amenities. The removal of  the unsightly canopy in front of Kings Cross is a case in point. Certainly the sense of space and height and, most of all, natural light are all important qualities of the existing station hall and if it were to be replaced we would expect an equally light and spacious volume. Note too that the platforms at present benefit from natural light and this too should be a feature of any replacement.

There are serious proposals to recreate this notable structure and put right a shameful episode in our planning history. This is something the BCAAC strongly supports. That being the case, it will be essential to ensure that the Arch relates appropriately to any new structures, both in terms of scale and materials and will not be dominated by overly ambitious development of the site. While the restoration of the Arch is a worthwhile proposal it must not be be achieved as mitigation for permitting harmful development elsewhere within the Euston plan.